Living in a Thai Neighborhood 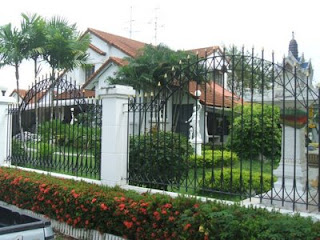 A walk through the "moobahn" gives one an idea of what it is like to live in a middle (and a few in the upper middle) class Thai neighborhood. Most of the inhabitants are Thai, with a sprinkling of westerners, Indians, and other Asians. Each house is unique, not only architecturally, but in the landscaping, which is a major part of the overall appearance. All have gates behind which are a genetic potpourri of dogs, some blustery in their warnings, others dead serious. It is fairly easy to discern which is which. Some owners leave the gates ajar so the canines can wander the street and play with other dogs. Those few that show aggression are easily dispelled with a strong "shooing" motion of the arms, despite one's initial doubts.
Two blocks from our street, there is one major traffic artery that cuts through the middle of the villlage, along which are a variety of shops and restaurants. I find it difficult to understand how each can stay viable with so many competitors. There are massage parlors, noodle stands, pet stores, Thai restaurants (several in a row along the lakeside offering basically the same menu), a kebab stand, dentist, TV and microwave repair, espresso 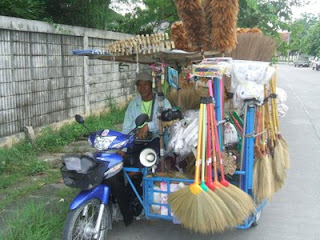 cafe, bakery, dermatological clinic, cuckoo clock shop (I guess there are homesick Germans living nearby), bicycle repair shop, potted plant shop, more permanent open air noodle cafes, a sidewalk water dispenser (15 cents for a gallon of filtered drinking water). Along the way it is not unusual to see mobile vendors selling such things as homemade brooms. Behind this valley of commercialism are the quiet neighborhoods.
For the last half-mile or so, the development's original commercial strip is packed with convenience stores, markets, internet cafe, small restaurants, a few western eating establishments, travel agents, hardware shops, and yet more noodle stands. Most of one's day-to-day needs can be met along this mile long stretch of road. At the entrance is a battery of motorcycle taxis, ready to whisk the adventurous (and those too cheap to pay a dollar for a taxi ride) to any destination within the village for the equivalent of about 45 cents or less.
Posted by John Stiles at 1:36 AM