Yahoo news reports "Bloody Protests Spread Throughout Thailand." Not true! From watching Thai news coverage and talking to Thais, this is simply false. In fact, the scene has quieted, as many of the protesters have left the area, or returned home. The conflict has been confined to a few scattered spots in Bangkok. Two persons are reported dead, but reports are that it was not from army actions against the protesters; it occurred in confrontations by other citizens not associated with the protests. Apparently, both tried to intervene to stop the protests and in the ensuing scuffle, were killed. The exiled ex-prime minister has accused the army of killing red-shirted protesters, but that has not been verified by independent sources.
Yesterday I took a taxi--or tried to--to the southern bus station to head down the coast for a beach holiday. Kat had gone with a friend two days before. What should have been a relatively uneventful trip turned into something else. The first indication that it wouldn't be so simple was when the taxi was turned back by red-shirted protesters as we approached one of the bridges that went over the river and out of town. As the taxi made its way toward another bridge, we found ourselves blocked yet again in the middle of the city and right in the center of the protests. Exiting the taxi, I decided to catch a minivan, but as I walked toward the van stands, I noticed crowds of people above me at the skytrain walkway looking down the street in the direction of my destination. A few blocks away, I saw a thick plume of smoke rising from a pile of debris near a blocked intersection and several abandoned city buses. When I asked a bystander what was going on, he indicated that there were skirmishes and I shouldn't go there. He also chuckled when I inquired about the minivans, and he shook his head. "Not running today!" Naturally, I took the cue and reversed my path. At that time, I saw no evidence of any demonstrations or police presence, but was to find out later that it was actually one of the isolated areas where clashes with the army had taken place. 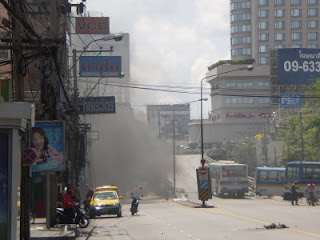 Catching another taxi at Victory Monument, which was all but abandoned since being taken over by the "red shirts" a few days earlier, we successfully made our way onto the expressway, assisted by a helpful red shirt who removed a barricade at the expressway entrance. We sped over the bridge, and twenty minutes later I was dropped off at the bus station, which strangely, is inside a bustling department store. When I eventually found the ticket window, I was told that my bus was departing immedately. I rushed to the dock where the driver was busy splashing buckets of water on the overheated radiator. Not a good sign. But, we left on time anyway and I resigned myself to the possibility of not reaching the destination on time. At least the air con was working on what I later named the "Kidney Jam Express."

During the three hour drive, I watched the festive scene of the Thai New Year, or "Songkran" unfold (Thailand celebrates three new year's dates--Roman calendar, Chinese, and Thai). This day of celebration involves a carnival-like atmosphere during the hottest month where immense amounts of water are splashed, squirted, or dumped on passersby, many of whom drive around in pickup trucks with huge barrels of water, merrily dousing each other. The further south I went, the more festivals I saw. It was a very strange feeling to see people completely unaffected by the events in Bangkok. This important holiday went on as if nothing unusual was happening in the capital city. Perhaps they are used to periodic political unrest, or maybe it's simply that nothing was going to prevent them from having "sanuk" (fun) on New Year's Day.

When I was dropped off in the seaside resort city of Hua Hin, the energy level was high. Thais and foreigners alike walked or drove through the city, most completely soaked, enveloped by the festive atmosphere. A motorcycle taxi took me to the hotel, weaving in and out of the nearly stalled traffic, avoiding curbside water tossing as best he could. "Don't worry," I told him. "I expect to get wet today." Me and my big mouth. Upon arriving at the hotel, we were definbitely not dry.

I switched on the TV to watch the updates, and was amazed at how the situation had deteriorated. The red shirt (anti-government) demonstrators showed a great lack of control, quite in contrast to their political counterparts (Yellow shirt opposition to the ex-prime minister ousted two years ago) during their demonstrations in November when they took over the airport. Then, they left the airport virtually undamaged, and it was able to open soon after. This has been much different, as the international and Thai news agencies have reported. It is a great disappointment to see this unfold. One side note: I discovered that the most complete and balanced news agency to report the clashes was--not BBC or CNN, and Fox? Don't make me laugh)--Al Jazeera. If you want to see unbiased reporting and interviewing at its best, go to their channel or site.

We participated in the lively Songkran street festival last night, and returned to the hotel wet and caked in pasty powder. The revelry lasted well into the night, long after we had fallen asleep. Today, the Thai stations are showing contnuous coverage of what seems to be relative calm in the city. I hope it's the end of the storm. What lies in wait for Thailand's political future is anyone's guess. But for now, the Songkran holiday continues unabated. I will post some photos and videos of the celebration once we get back to Bangkok later in the week.
Posted by John Stiles at 7:41 PM

I recently came accross your blog and have been reading along. I thought I would leave my first comment. I dont know what to say except that I have enjoyed reading. Nice blog. I will keep visiting this blog very often.

Nice of you to leave your comment. I hope you continue to enjoy the blog!

This is a very interesting blog and so i like to visit your blog again and again. Keep it up.