Visit to a Bhutanese Monastery

High on the mountainside of the Punakha Valley in Bhutan sits an aged monastery, which is home to one hundred boys of various ages. In this isolated setting, the boys attend a classical Bhuddist monastic school where they study to become monks. Surrounded by the lushness of the jungle slopes, the serenity is palpable; the silence a perfect backdrop for meditation, prayer and reflection. 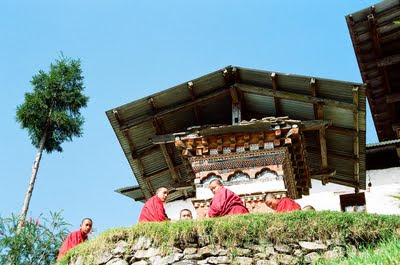 As we entered the grounds, an air of peacefulness greeted us. Met by the head abbot, Guru Tshewang, we walked through the grassy courtyard where novice monks of all sizes flashed warm smiles and waved. Sitting in the reception room, we chatted for an hour or so with Guru Tshewang, getting a brief history of the monastery and learning about the school. Very personable, Tshewang paused often to ask us for the correct English phrase to use. Although Dzonga is the official Bhutanese language, few people like to use it, and all learn English from an early age. It is the language of instruction in Bhutan schools. 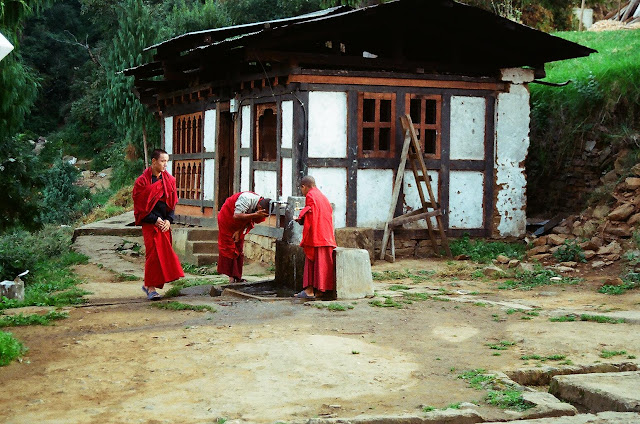 After a basic but hearty meal, we went to different classrooms to teach an English class. My class of advanced English speakers met in the sanctuary, whose walls were decorated with brightly painted murals of Tibetan guardian spirits and golden statues of Buddha. The class consisted of me answering questions about myself and America (“Tell us about your schools.” “What is New York like?” “Have you been to Los Angeles?” “Do you like Bhutan?”), and them relating to me what it was like to live in the monastery. They were even eager to learn a bit of Thai, meager though my level happens to be. It was a delightful hour and a half. Most surprising was the length of their workday. Up at 4:30 each morning, they spend 18 hours studying with time off for breakfast, lunch, dinner, and a half hour of CNN and BBC news (a satellite dish sits incongruently on the side of the monastery). We slept comfortably on cushions in the reception room, awakened briefly in the middle of the night by a chorus of baying from the guard dogs. When I asked the abbot about it in the morning, he said, “Probably leopards. They come by occasionally, but won’t come near the dogs.” That was comforting. 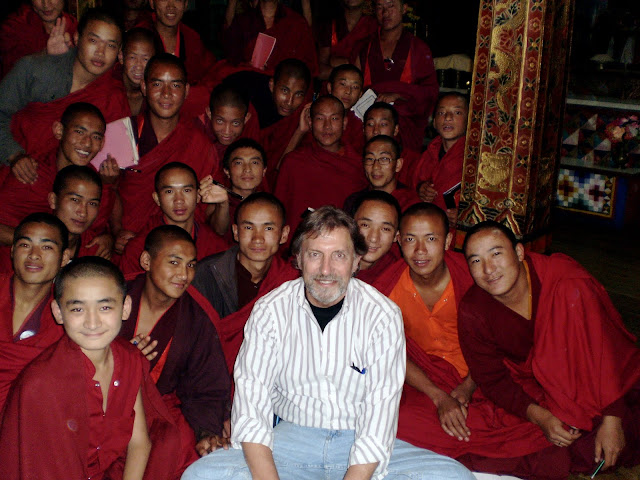 I was awakened by a droning sound that my sleepy brain eventually interpreted as human. As I stepped into the soft morning light, I saw scores of red robed boys sitting cross-legged on the ground, their prayer books in their laps, and all chanting in that mysteriously enticing monotone of meditation. I was transfixed by the scene, and sat for a while, listening to the lulling sound, gently rocking like so many of the young chanting novices. A rich scent of cedar smoke and incense hung in the air as the sun rose out of the mist. 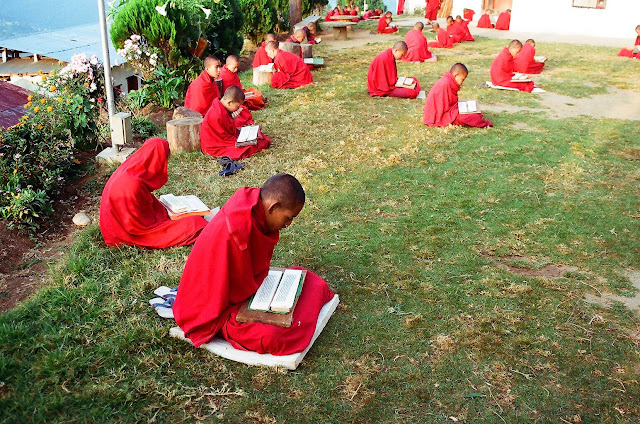 Later, we walked the grounds and observed the many chores and creative arts projects that the novices were engaged in each day, such as classical Tibetan Buddhist music and making mandalas from butter for prayer services. All too soon it was time to leave. Although brief, the visit left me with a greater understanding of Bhutan, its history and religion (Tibetan Buddhism is different than Theravada Buddhism practiced in Thailand). It endeared me even more to this peaceful and beautiful country. We most certainly will return. 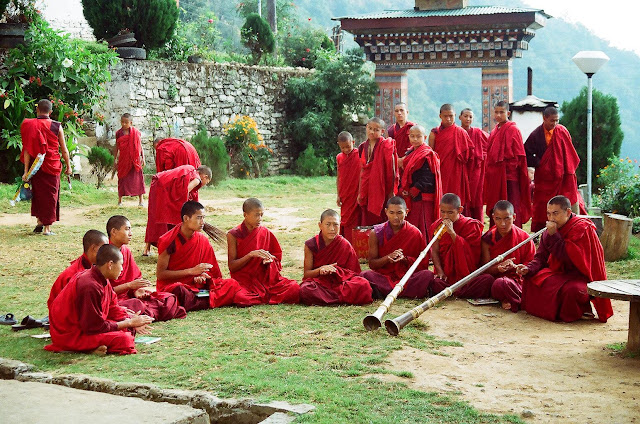 glad that you like Bhutan...it's always nice to see outsiders giving more interest in our culture and tradition...hope you will spread your experience in our country Bhutan