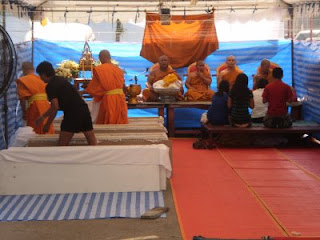 People lying in coffins for blessing
Today is a Thai national holiday known as "Makha Bucha Day," the Buddhist Day of Lent. The story goes that this celebrates the gathering of 1,250 of Lord Buddha's ordained followers to hear his sermon nine months after he found enlightenment; they all showed up at the same time with no prior intent. On this day, the faithful gather at temples to pray, give alms to monks and participate in many rituals. On my way to a river taxi, I walked into the middle of a busy scene of merit-making at a local "wat" or temple. 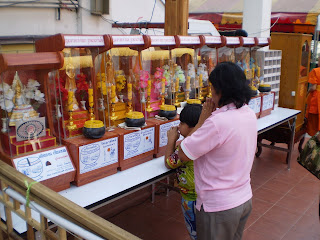 Fortune teller machines--One for each day of the week
People gave gifts to chanting monks, laid garlands at statues of Buddha, laid in coffins and were covered with linens (yes, you read that correctly) to be blessed for good luck (and cheat death,perhaps?), and in keeping with their traditions, the fortune tellers--both human and mechanical--did a brisk business. Novice monks spoke over loudspeakers and incense wafted thickly over the plaza. But the most fascinating sight was something I had never seen before in my nearly four years in Thailand: A Monk Alms Carousel. Take a look at the video:

Since taking this video, I have learned that this is indeed an alms collection, in which real monks are supplanted by mannequins, perhaps to streamline the process. The little girl in the video is an orphan, who lives at the wat and will be educated there until she is an adult. Her job is to help out where ever she can, and that day it was to empty the alms bowls from the "Merit-go-round" and put the empty bowls back in the hands of the inanimate surrogate monks.
Posted by John Stiles at 1:26 AM