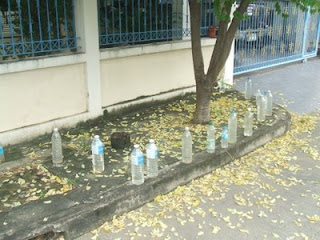 Every now and then I see something here that is totally alien to my experiences anywhere else. The first time I saw a row of water-filled plastic bottles along the curb, I was befuddled. Drinks for the workers? Some sort of inexpensive sidewalk decoration? Modern sculpture? No matter how hard I tried, I couldn't think of a plausible explanation. Finally, I asked my neighbor what they could be. Her reply surprised me. Take a look, and see if you can guess what they're for. Share your ideas in the comments. I'll post the answer after you've had a chance to respond! OK, as of 11 February, I have posted the answer in the comments. Check to see what this is all about!

Probably not meant to be there. My first guess if they're common is that people are dumping there on purpose without public knowledge. Who would dump such large amounts of decent bottled water in the hot weather. Unless it is useless to anyone...urine? People can't be bothered to get out of the car. I'd probably blame taxi drivers since they're the worst drivers over there.

Well I've been known to do that in traffic jams (UK), but I keep it IN my car til I get home.

N:
Thanks for the guess, but no, there really is a reason for this...it's intentional. I'll post the answer in a few days. By the way, remind me to watch where I put my feet if you ever offer me a ride!
John

Some kind of barrier/fence? My first thought was actually that the bottles had a small hole in the bottom and they were for watering the tree slowly...

My guess, its for watering that tree, seems to easy though...can't wait to find out!

Ok...my first thought was that they were slowly watering the tree as well. Seems to be a popular response. I DIDN"T, however, think of emergency urine receptacles!! Hmmmm....maybe they are for people to use to take their medicine when they come out of the pharmacy?? Are they in front of a pharmacy?? That's my best guess for now. Anxious to hear!

Good guesses, all. Watering bottles? Hmmmm. Not a bad idea, come to think of it. But that's not it. I'll post the answer within the week. Thank you for your responses.

ANSWER: According to my neighbor, these bottles that I see around town are supposed to deter dogs from marking the bushes or tree, or in one case, auto tires. When I asked how it works, my neighbor said she didn't know but apparently the dogs are repelled because of their reflections. Skeptical, I took my dog for a walk along the curb. He had no problem walking between them to complete his quest to mark his territory! So,there you have it. Despite my unscientific experiment, people persist in using this "doggie barrier."